What is the power converter?

What is Pure Sine Wave?

The pure sine wave or sine wave is named after the function sine and firstly a mathematical curve. In the electronic area, pure sine wave inverter means that the output voltage is converted into a sine wave-form. In the sine waveform, the voltage alternates with a sinusoidal curve that has one rounded peak above or below zero voltage. It rises and falls smoothly with a stable and smooth turning phrase angle. When it arrives at zero volts, the voltage can change its polarity instantly without a pause.

Charging a device securely is not only what should be cared about at home or office, but also important for travellers on the road, especially in today’s world where overseas travel becomes more and more popular. Pure sine wave technology that can make charge safer and easier has been already used in many occasions, and BESTEK is the first to put this high tech into travel converters to make by pushing out the world's first pure sine wave converter. Get 10% OFF with code F7LID52S to buy BESTEK power converter from Amazon, click here 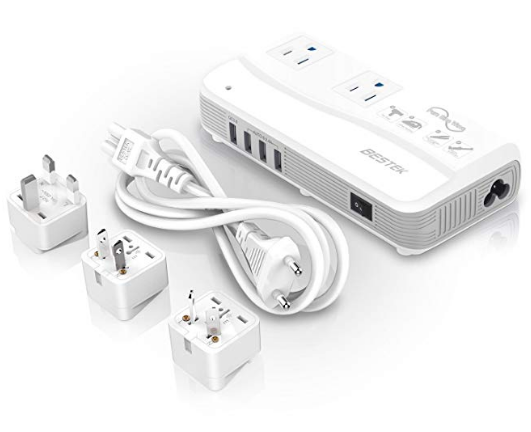 * Convert all countries' voltage to US voltage (110V), enables you to charge your devices safely when traveling worldwide.

* Provides 2 AC outlets, 3 USB charging ports with total 6A output plus 2 AC ports when QC3.0 port, to allow you to charge up to 7 devices simultaneously.

* NRTL safety tested, upgraded hardware made, and all-around safety protections built in, ensure complete protection for you and your devices.

What is the modified sine wave?

Different from the pure sine wave, the modified wave convert voltage less smoothly. It doesn’t convert the voltage straightly up and down but there are 2 or more turning blocks above and below zero. Modified sine wave may have more than 2 peaks, so the peak voltage may stay instantaneous for a few milliseconds. As for the zero cross, MSW may also keep at zero for a few milliseconds.

1. Output voltage in the form of the pure sine wave has low harmonic distortion and clean power like utility-supplied electricity.

3. With the pure sine wave, the output is more stable and effective, suitable for any loads.

5. It can effectively prevent crashes in computers, glitches and weird print out.

2. The disadvantages are that the modified sine wave won’t work well with some modern appliances.

* Laser printers, photocopiers, and anything with an electrical component called a thyristor

* Anything with a silicon-controlled rectifier (SCR), like those used in some washing machine controls

* Some fluorescent lights with electronic ballasts

* Some battery chargers for cordless tools

* Some new furnaces and pellet heaters with microprocessor controls

* Medical equipment such as oxygen concentrators

The Economical modified sine wave is more suitable for common users who just need to run TV, light bulbs, microwave oven, tools, etc. While pure sine wave inverters are suitable for you if you want to power up your sensitive electrical or electronics items like computers, laptops, stereos, laser printers, and other certain specialized applications like medical equipment.

To choose a power converter that suits you well, you should first make it clear what appliances or electronics you have or how you want to use it.

BESTEK Price Cut - Get what you want at prices as low as 0.01