What is a Power Inverter and How to Choose? 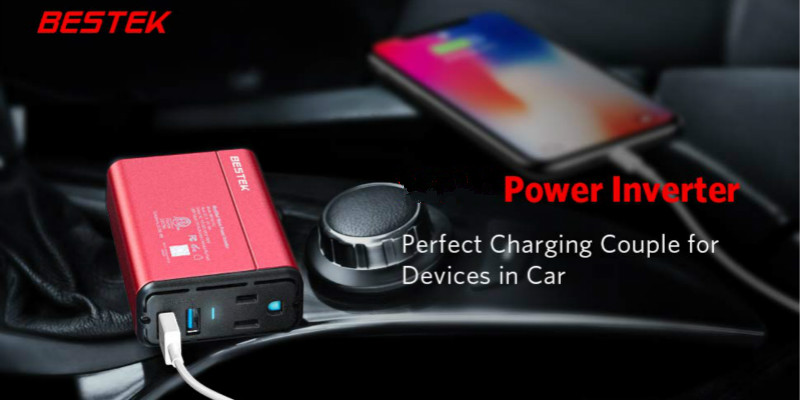 With the increasing popularity of automobiles, some common 110V/50Hz AC electrical equipment like TV, laptop, refrigerator, cooker, can not be directly used in vehicles powered by 12VDC batteries, which greatly limits the scope of use of these appliances and brings many inconveniences to people's lives, especially when you have a trip or an outdoor activity. Therefore, an economical and practical car power inverter has become a common demand in the market. So how do you choose a good inverter that suits you? Before giving a suggestion, let's first understand what an inverter is.

What is a power inverter?

The car power inverter is an electric device that can convert direct current (DC 12V) to alternative current. Such a power converter makes it possible and convenient for you to use some electric devices in the vehicle. The inverter gets power supply from a car battery when you directly plug it into the cigarette lighter. Power inverters first increase the DC voltage into a high direct voltage and then change the high direct voltage to the alternative voltage. With the car power inverter, you can use all the small appliances in the car, such as mobile phones, laptops, digital cameras, car refrigerators, camcorders, DVDs, etc., which makes people have a feeling of being at home even in outdoors.

As the name suggests, it is the sine wave car inverter. the AC waveform of such power inverters is the same as the waveform of the mains grid, or even better than the 110V mains quality because of some other factors like the absence of electromagnetic pollution in the power grid. The advantage of a sine wave inverter is that it provides the same or even better AC power than the mains. When power is satisfied, almost all household appliances can be used. However, due to the high cost of construction, the true sine wave inverter is expensive and haven’t been fully recognized by consumers yet. But if you have precise devices like TV, washing machine, air conditioner, water heater, LCD monitor, refrigerator that need inductive load, then you need to choose a pure sine wave inverter to protect these valuable devices.

The square wave inverter delivers poor quality output. Its maximum value from positive to negative are generated almost at the same time, thus resulting in severe instability effects on the load and the inverter itself. The square wave inverter uses the simple multivibrator, the technology of which belongs to the level of the 1950s. It costs low to produce square wave inverter, and the price is cheap. The disadvantage is that the load capacity is poor, and can only reach 40%-60% of the rated load. If the load is too large, the third harmonic component contained in the square wave current will increase the capacitive current flowing into the load, which may damage the power filter capacitor of the load. And another factor is that it cannot carry the inductive load.

In general, waves from square waves to the rounded trapezoidal wave that is closer to a sine wave, are all referred to as a modified wave. However, from a practical point of view, the modified wave inverters can meet most of our electricity demands, and also has a moderate price, high efficiency, low noise, etc., Today, it has gradually become the mainstream product in the market.

In electrical engineering and mechanical engineering, the power rating of the equipment is the highest power input allowed to flow through particular equipment. In order to support different electrical equipment, it is necessary to use different power inverters with different specifications, so it is necessary to know which appliances are used when selecting a power inverter. For example, you bought a 40W inverter but found that your appliance needs a 110V power supply, then you can’t even start up the device. There are inverters including 150W, 300W, 500W, 1000W, 1500W, etc. If you go out to work or travel, you can use the inverter to drive the electrical appliances and various tools to work by connecting it to a car battery. Generally, household appliances such as car refrigerators can be used smoothly. At present, the most common inverters on the market are 70W-150W. Also, you should make sure all your devices are within the power of the inverter, or it will damage your devices.

A good power inverter should be equipped with safety protection systems in all directions so that your devices and your car can be well-protected from overheating, overcurrent, over/low voltage, overloading, short-circuit. It is not new to see fire occurs during electronic or appliance charging. So the power inverter should be made of high-quality fire-resistant materials. Such power inverters with solid construction can also work in some tough areas where there is no electricity or any disaster occurs. what's more, the power inverter should have the alarm indicator light to remind you when trapped in an emergency to keep yourself secured. All in all, a power inverter with full protections and premium materials can ensure you a safer charging environment.

Certified car power inverters must have clear brandmark and company name on the body. And the device must measure up to the standards of national or international electronics. When you want to choose a reliable power inverter, look for some reliable brands like BESTEK. These brands guarantee you high quality and best customer service.

Though the power inverters are now popular today for vehicle owners but many people still have little knowledge of inverters. Hope this article can help you learn something and choose a good power inverter to make your life easier.

Start a Happy Travel with BESTEK!