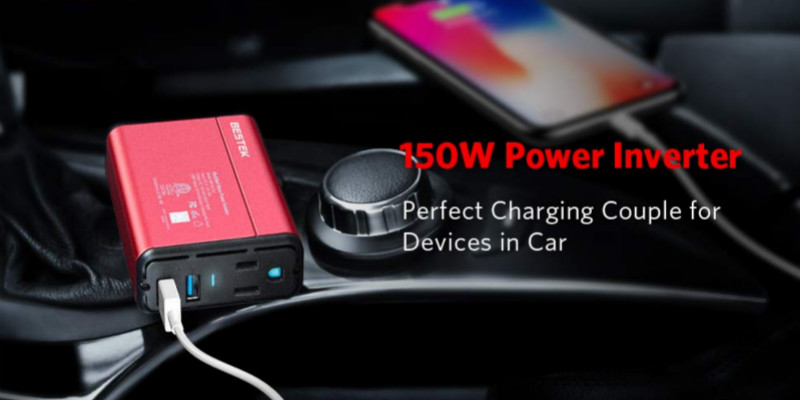 The power inverter can convert DC12V to AC110V. It is still very practical, while there are still many people worrying about that the car inverter is harmful to the car battery because they think anything that needs to sue the automobile battery supplies, more or less will have some impact on the battery and will bring worse effect on the battery if it is used improperly. So we just need to find out the correct way to use the inverter, which will help reduce the damage to the battery!

Don’t keep the air conditioner on when the engine stops working, because that may waste a lot of power and may make the battery died within several minutes. And also use as fewer appliances as possible when the car stops. The battery life will become shorter if it is always in the status of electricity loss.

If only the inverter is plugged in the cigarette lighter without any other electrical appliances, then it is equivalent to no load. If there is a load (such as a 65W laptop plugged in), and assume that the inverter has 90% efficiency, then it is equivalent to 72W of power supplied by the battery. Battery life is related to the number of charge and discharge, so how many electrical appliances are plugged in the cigarette lighter means how many times of battery charge and discharge are added. In that case, the battery life is certainly affected, but not very much, and for those small electrical appliances, the impact to the battery is just like playing a radio. Of course, a good battery will be more durable, relatively can withstand the load of the toss. There is a battery specifically designed for the frequent use of electronic devices in the car, that will bring fewer damages to the battery and the car.

1. The inverter shall be used in accordance with the user manual.

2. The output voltage of the inverter is 220 volts ac, and this 220 volt is in a small space and mobile state, so be careful. Keep it in a safe place (especially away from children!) in case of electric shock.

3.When not in use, it is best to cut off its input power.

4. Do not place the inverter near the sun or heater outlet. The working environment temperature of the inverter should not exceed 40 ?.

5.choosed must be consistent with the inverter dc input voltage. For example, a 12V inverter must be used with a 12V battery.

6. The output of a power inverter must be higher than that an electronic appliance needs, especially for those high power appliances like refrigerator, air conditioner, which may require some extra electricity.

7. The input voltage of an inverter has a positive and a negative electrode. Connect the two properly and the power cord must be thick enough as well as not too long.

8. The car should be placed in a ventilated and dry environment to keep away from the rain. Keep it 20cm distance away from the surrounding objects, and away from flammable and explosive goods. Don’t place it in an environment with over 40? temperature.

What is a Power Inverter and How to Choose?

Start a Happy Travel with BESTEK!