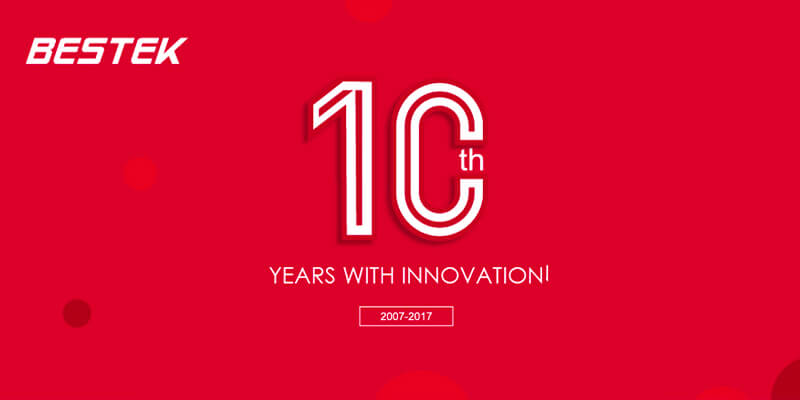 BESTEK is about to celebrate its ten-year anniversary. From 2007 to 2017, BESTEK has developed for ten years already. Thanks to the support from all customers and fans, BESTEK has grown up from a small merchant  into a reliable and famous brand all over the world. Coming back to the past ten years, BESTEK has made great achievements with all BESTEK staff’s continuous efforts day by day, year by year.

The Pace of Development

1.    BESTEK headquarters establishment
In April 2007, BESTEK headquarters was established in Shenzhen. Mr. Xu, president of BESTEK, was an ambiguous and aspiring young entrepreneur at that time who stated his own business with a hope of making life better. Start a self-employment is not easy, but he never gave up and overcame all obstacles the company encountered. Only a good leader can lead company to a bright future.

2.    America Branch Establishment
BESTEK was established with a hope of making life better, not only for Chinese people, but for people all over the world. BESTEK started to step out of domestic market and entered into life of  people abroad. In 2010, BESTEK set up a branch office in the United States and started a layout of BESTEK U.S. Warehouse. this made a solid foundation for BESTEK's next business expansion.

3.    Win the first battle
In 2011, BESTEK began to compete with other sellers all over the world in Amazon the world’s biggest sale platform. This was regarded as the first battle of BESTEK. BESTEK lived up to previous efforts and hopes and won the “Amazon Strategy Seller” in the end of 2011. This award was undoubtedly an important encouragement for BESTEK who went abroad for less than a year.

4.    More Branches Establishments
In 2012, BESTEK set up another branch office in the United Kingdom and prepared for the layout of UK warehouse. In 2013, Australia branch office of BESTEK and Japan branch were both established accordingly. Up to now, BESTEK has set up branches in varieties of countries all onver the world.

1.    Business Scale
BESTEK now is a strong group with hundreds of staffs and full-featured departments, including R&D department, production department, marketing department, sales department, financial department, etc. Stronger teams guarantee a higher efficient business and higher quality products. In 2014, BESTEK brand was registered globally. So far, BESTEK brand has been registered in more than 100 countries, ranging from North America, Europe, and Asia to Australia, More and more people all over the world have the access to BESTEK products and services.

3.    Product and Revenue
During the ten years, BESTEK has tried to design and produce many kinds of products. From in car accessories, to household appliances and outdoor equipment, BESTEK keeps going on product creation and has got more than 30 patents. BESTEK has a globalized business expanding to Ebay, Walmart, WISH and established its own official online shopping mall bestekmall.com. BESTEK products keep ranking the top in these large sale platforms. At present, BESTEK business has reached to multiple areas from America, Europe, and Asia, and is tending to reach to more areas as much as possible. About revenue and market shares, BESTEK power inverter takes up 40%, the largest among the main sellers including KRIEGER, AUKEY, ROADPRO, SAFEGO, ERAYAK, etc. Travel adapter accounts for 12.4% and power strip 7%. In the first half year of 2016, BESTEK made 119 million dollars of revenue and 15.06 million net incomes, respectively with year-on-year growth of 111.77% and 203.39%. The statistics keep a sustainable growth in 2017.

2017 is the 10-year anniversary of BESTEK and a new threshold of a brighter future. The ten years from 2007 to 2017 not only witnessed the growth of BESTEK, but also built a solid foundation for BESTEK’s further development. Thanks for support of all customers and fans. BESTEK will keep moving on to provide better products and service.